Submitted by Correspondent,Cristiane Roget , For Immediate Release November 6, 2017 6AM PST

Miami/FL Celebrated visual artist Daniel Stanford will return to Art Basel for the 4th consecutive year in a solo showcase of his new collection at the sensually appointed Shore Club – in the heart of Miami Beach with a sister collection on display at the Macaya Gallery in the burgeoning Wynwood Art District.

Love is Eternal _Gov Love is Toxic by Daniel Stanford

A month long solo exhibit, entitled FASCINASIA, an art installation complemented by a calendar of pop-up-style events with one fundraiser inspired by Lady Gaga and NFA along with philanthropic receptions commemorating the 15th Anniversary of Art Basel Miami week. Stanford’s fine art graces the private collections of Rihanna, Roc Nation and Snoop Dogg. The celebrity continuum will include an unveiling of a Lady Gaga portrait on December 9th as a highlight of the Gaga Gala and Fundraiser. r.s.v.p. art@daniel-stanford.com

On the program are evening must attend activations that are guaranteed to capture press attention. Among the slated nightly fundraisers is the Gaga Gala. The NFA (National Fibromyalgia Association) is honoring Lady Gaga’s philanthropic work and her willingness to show her support and help to raise funds for research. Stanford is making signed limited edition prints of the portrait of Gaga entitled “I am not Broken” available on auction through Paddle8 with proceeds going to the NFA.

Michelle Tidor for Kids Foundation is hosting a Garden Art Gala with invited guest Artist & Performer. A night inspired by Asia influences is hosted by philanthropist Sany Dash, founder of the Sany Skincare Collection by way of the village of Orissa, India. She is a vocal spokesperson advocating the abolishment of the sex trade by providing employment alternatives and education. In support of Epoch Times Group, New Tang Dynasty Televison, Honest Abe List (HAL) DAFOH, The March Jaiden Project,”Promoting  Vision for Children With a Heart” and a grand finale a showcase of tomorrow’s top talent produced by ‘Little Dreams Foundation” founded by Orianne Collins are on the horizon. Final dates and times to be announced on November 15, 2017. Many of the same guests that attended this October’s, Epoch Times Group Black Tie Gala at the Universal Hilton, Los Angeles are making an exodus from California to Florida to participate in ‘Daniel Stanford’s, Awaken your Sixth Sense Installation‘. Many are traveling as a gesture of appreciation for Stanford’s donation to the Epoch Times Group Silent Auction. He contributed a singular work of art titled ‘Miss Asia’ that was appraised at $14,000k.

The former Miss World Canada and motion picture star, Anastasia Lin, is also among the invited luminaries. Ms. Lin has experienced firsthand the tyranny of suppressed speech and repressive gender exploitation.  Her portrayal in the film “The Bloody Edge” to be screened in Los Angeles on November 21 at U.C.L.A. is a riveting case of art imitating life.  She reveals her personal struggles in the exercise of her rights to free speech and liberty. 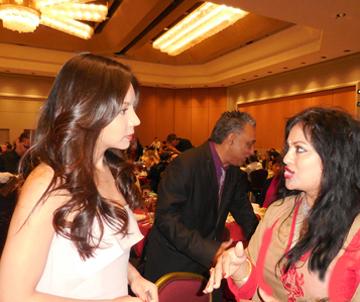 In lieu of endless political battles and institutionalized inequity there is change among the creative set as evidenced at Stanford’s Solo Exhibit in 2016 during ArtBasel Week. “The only thing that clearly matters, as human beings is our health and universal well being,” said Daniel Stanford.  “Family matters, freedom to be and let be matters. Dignity, compassion, shared opportunity, kindness to people and all of the earth’s creatures, matter,” said Kacie Schweikhardt, mother, fashion maven and career professional at California ‘s FIDM, a fashion institute.

Abundantly evident at the Stanford Fine art installation is “we are capable of putting aside our differences, to dine and appreciate the finer things life has to offer among strangers, while knowing what we have truly in common is written in our hearts,” quipped Dr. Dana Churchill of Churchill Centers of Pasadena and Beverly Hills where Stanford’s work is on view at the BOA Gallery on North Bedford Drive in Beverly Hills.  Media Partners also include Epoch Times with a readership of 100 million published in 35 countries and 21 languages with plans to cover the proceedings. The week long Art, Fashion and Culinary events are curated to attract generous guest, up-market collectors of contemporary fine art and global Influencers.

Some recent articles by Cristiane Roget